Discover city of Split. Biggest town in Dalmatia, also second biggest town in Croatia. The city in the bottom of Marjan Forest Park is not only in hearts of locals, but also of many tourists that visit. All in all, Split is not only a town with impressive yacht marina and luxurious hotels, but also as a tourist mecca because of its rich cultural heritage. 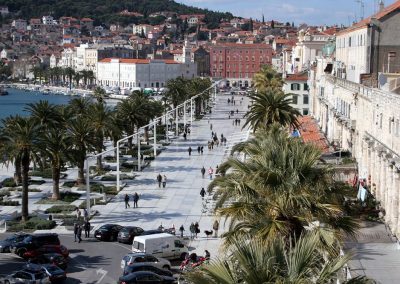 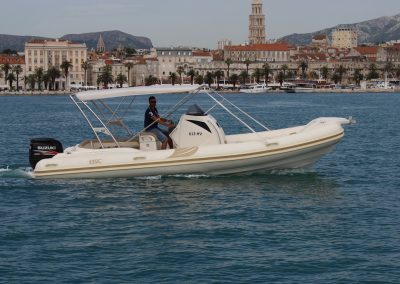 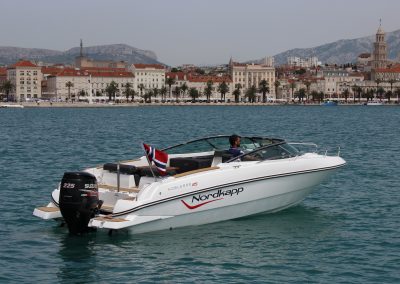 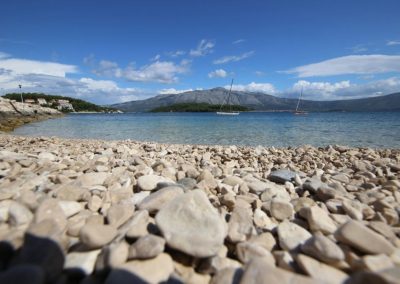 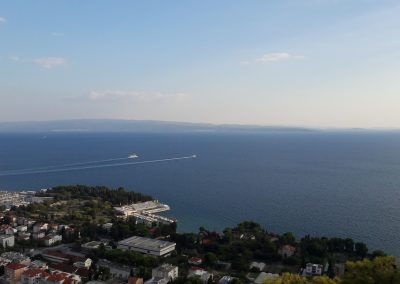 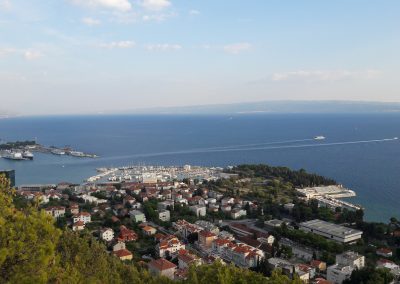 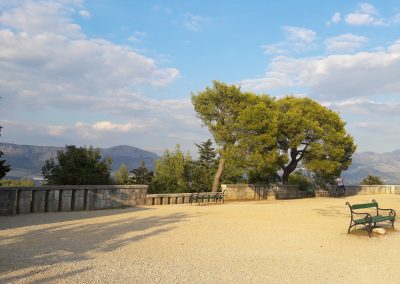 City of Split is around 1700 years old. Most famous attraction in city of Split is certainly the Diocletian’s Palace protected by UNESCO. Diocletian’s palace is gorgeous place to visit because of both rich history worth listening and learning about and fabulous architecture. There are so many interesting stories about it and its construction.

In addition, you can also visit Split Zoo and Cathedral of St. Marian.

Split is also known as a sports town, where were organized Mediterranean sports games in year 1979.

Town Split has a lot to offer to those who want active holiday such as land sports (football, basketball, volleyball) and also water sports (sailing, swimming, diving, underwater fishing…).

Split is situated on Marjan peninsula in region of Central Dalmatia, in country of Croatia. It is surrounded by mountain Mosor on north, Kozjak on northwest and hill Perun on east. Split is located on area of 79 km2 and it is surrounded by islands Hvar, Brač, Šolta and Čiovo. Split is, by all means, administrative, cultural, historical and traffic center of Dalmatia and it is second largest city in Croatia.

Airport Split is connected with many European centers. If you decide to come by car or bus, you can take highway A1 Zagreb-Split, exit in Dugopolje to come to Split. There is also coastal road which you can use. Although, it takes more time for you to come, as a result you can see many beautiful places on the way. Furthermore, you can come by train to discover Split. Train station is next to the ferry port and also bus station in center of Split.

Split has a population of around 178 000 inhabitants, but in wider area it goes up to 400 000 people. Most of them are Croats with smaller number of Bosnians, Serbs, Slovenes, Montenegrins and other. City of Split also includes settlements Kamen, Stobrec, Donje Sitno, Gornje Sitno Zrnovnica, Slatine and Srinjine.

City of Split has a Mediterranean climate with hot and dry summers, but also mild and rainy winters. Average year temperature is 15,7°C and it has around 2700 sunny hours per year. Flora in Split is mostly oriented on hill Marjan. It consists maquis, Aleppo pine, palms and other Mediterranean vegetation.

Sea temperature during summer can go up to 24-25°C. There are different winds that blow in Split area, like mistral, south-east wind and bora. Mistral is refreshing wind that brings nice weather during summer. South-east wind called JUGO is warm and moist wind. It blows mostly from September till April and, as a result, brings bad biometeorological conditions.

Bora is very strong north-east wind which blows from mainland to the sea and all in all it can be very strong and unpleasant. Highest bora speed was recorded in 2003. and it reached 304 km/h.

Discover Split through its history. Split’s area has been inhabited since Prehistory. In the caves of mountain Kozjak and mountain Mosor archeological remains of human activities were found. Also, in area of Gripe remains of first settlements were discovered. To conclude, people were living there before emperor Diocletian.

There are some signs that also Illyrians lived in area of Split.

Diocletian was Roman emperor from 284.-305. He introduced new system Tetrarchy, which means simultaneous rule of four rulers. His real name was Diokles, he was Illyrian and also persecutor of Christians. Indeed, he was only Roman emperor who departed without forcing. Afterwards, he planned to spend his retirement days in Split’s Diocletian’s palace which he built in 4th century.

In 480. last Roman emperor Julius Nepus was poisoned in Diocletian’s palace. Later in 7th century, after Diocletian’s palace was more and more populated, Split started to grow and develop outside the walls of palace. After Split was Christianized, emperor’s mausoleum became a church. Today it is a cathedral of St.Duje.

Town of Split was independent commune with its own Statute and Council until 15ht century. From the 15th till the end of 18th century Dalmatia was under the Venetians. Later from the 1805.-1813. it was under the France and Napoleon and then it belonged to Austrian-Hungarian Monarchy. In 1912. the construction of the railway Zagreb-Split began and it was finished in 1925. After World War I. Dalmatia was connected with Croatia. At last, Split became administrative, cultural, historical and economy center of Dalmatia.

In 1991. Croatia was attacked by Serbia. Split was bombed in September by the torpedo boats by JRM and in November from the sea. In 1991. Split became part of independent Republic of Croatia and from 1993. it is center of Split-Dalmatian region.

You can find different accommodation units in Split like hotels, apartments, private houses and rooms. There are many apartments in center of Split, in Diocletian’s palace. Split is historical and cultural place with famous touristic destinations and natural beauties.

Bacvice is most known and most famous Split’s beach. It is situated 1 km far from the center of Split. It is famous place for picigin lovers. Picigin is a game played with a small ball which has to stay in the air. There are also many coffee bars and restaurants.

Diocletian’s Palace was built in 3rd and 4th century, as shown above, as retirement plan of emperor Diocletian. There is mausoleum where the emperor was buried. Today it is a cathedral of St. Duje who is protector of Split. In 6th century when Salona was destroyed, many refugees inhabitated palace. It is center of Old town today. Most known parts of Diocletian’s palace are: Cathedral of St. Duje with mausoleum, Golden Gate, Iron Gate, Peristil, Temple of Venus, Silver Gate, Brass Gate, Diocletian’s apartment, Portiron…

During the construction of Diocletian’s palace, on location west of Peristil, Temple of Jupiter was built. Emperor Diocletian ordered to bring sfings from Egypt and they were put in front of the temple. First Archbishop in Split was Ivan Ravenjanin. Andrija Buvinja built a wooden gates of the cathedral. Bell tower was probably built in 13th century. In 17th century was built fort Gripe to defend Split from the Turks and it is situated east of the center of town. After Split developed outside of the Diocletian’s palace walls, inhabitants needed protection from Turkish attacks. As a result, many similar forts were built to defend part of Split that is outside of the walls of the palace.Today it is a Croatian Maritime Museum.

Park-woods Marjan is a hill situated on west side of Split’s peninsula, 3,5 km long and 1,5 km wide on widest point and its highest peak is Telegrin. There are many desert habitats, such as St. Jere. St. Jere used to be pasture. In 19th and 20th century it was wooded with pine trees. Churches on Marjan hill are: Church of St. Nicholas, Church of St. Jere, Church Betlem (14th century), Church of St. Benedictine..

Today, Marjan is popular recreational place for Split’s inhabitants. There are many beaches where you can enjoy like Zvoncac, Jezinac, Kasjuni, Obojena, Bene… Riva is certainly most known waterfront in Croatia and it is 1700 years old. Lot of events are kept on Riva. It is 250 m long and it is very attractive for walks within the sea. Monument Gregory of Nin was built by sculptor Ivan Mestrovic. Gregory of Nin was most known Nin’s bishop. When Tomislav was declared as king in 925., Gregory of Nin has the highest position in Croatian Church.

Gregory of Nin was the main proponent of folk Glagolitic alphabet and Old Slavic language. There are three statues of Gregory of Nin in Croatia. One is in town Nin, other in town Varaždin and third in Split. As a matter of fact, it is believed that touching its thumb brings happiness and wishes come true.

There are many different coffee bars, night clubs and cocktail bars where you can enjoy all night long.

Also, you can enjoy in beautiful nature which it offers. There are many activities and events kept during the whole year, but mostly in summer months in Split. Festival of Popular Music in July, folk nights, Split’s summer from the middle of July till the middle of August. Diocletian’s guard shift from June till September, Festival of Mediterranean Films in June, many concerts and exhibitions…